A TOS Review: With Lee In Virginia

We are such a fan of the Audio Book. I can’t even tell you. Many happy moments have been spent draped over the furniture listening to a great book. 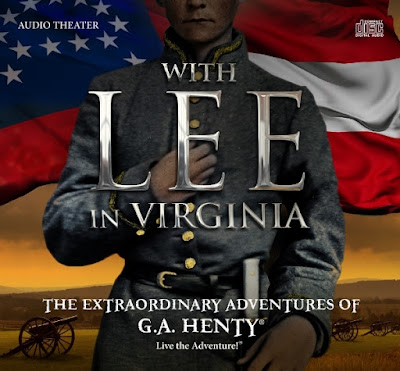 Heirloom Audio Productions has such a terrific job bringing history into our little world. They produce wonderfully made productions…complete with superb acting and a terrific story.  Their plots come from the works of G.A. Henty. G.A. Henty (1832-1902) was a British war correspondent and novelist. His books were deliciously adventurous and historically based.


With Lee In Virginia is adapted from Henty’s novel and is set in the time of the Civil War.
What did we get?


We received an audio CD (2 disc), a downloadable Study Guide and Discussion Starter (52 pages) and tons of bonus materials. They included printable copies of the cast poster, the official With Lee In Virginia soundtrack MP3, an ebook of the original With Lee in Virginia (from Henty) and a printable quote from Robert E. Lee.


That’s a lot of goodies!


The story features Vincent Wingfield. He is a southern aristocrat who wrestles with some of the more vile practices of the folks in his social class…namely slavery. He, however, does his duty to his home state of Virginia and joins the Confederate Army. I was curious to see how this would play out. There is always a Christian message of perseverance and love in all of Heirloom Audio’s productions. I didn’t want the slavery issue to be in anyway justified or downplayed.


I was so grateful that we got to see Vincent struggle with those very issues and convictions. He also learned forgiveness and about God’s sovereignty. The story also deals with Duty and seeing a commitment to something or someone through to fruition. This message is so important for our boys (and girls!) to hear.


I must say that this story doesn’t shy away from the brutality of war.  It is not light and fluffy. There are humorous moments…but don’t expect everyone to come out unscathed.  The intended ages are 6-adult. You have to make that determination if the subject matter is appropriate if you have a sensitive kiddo.


Just a bit about the Study Guide. It does provide biographies of the author and all the characters involved. There is a map showing all of Vincent’s travels and even historic photos and illustrations.


In addition to all of the historical material and comprehension questions there are 2 Bible studies. I think there is enough here to really do a nice study.


This has turned out to be one of Josiah’s very favorite Audio Productions of all time. Considering we’ve listening to a whole bunch…that’s saying a lot!  We did a lot of “car listening” and he has asked to listen to it several times.  He even asked if we could study a little more about the Civil War.


That, my friends, is hunky dorey with me. You want to learn some more? Okay! That is every homeschool moms wish.


There are also some well-known actors among the cast. Josiah was so confused when I pointed out that a certain character was played by Sean Astin. Of course, Mr. Astin plays Sam in the Lord of the Rings trilogy. Josiah wanted to know where his accent went. Kirk Cameron plays Stonewall Jackson. Josiah knows Mr. Cameron from Fire Proof and Monumental. I was introduced to Mr. Cameron as Mike Seaver.  Does this date me?


A few of our favorite voices from other Heirloom Audio Productions could be heard. It was like visiting old friends. We are fans! Can you tell? Just a little aside. Brian Blessed could read my “to do” list every day and thus inspire to me to do great things. His voice is just butter. And cream. And hot chocolate. With marshmallows.


This is such an inspiring story and an excellent production.  Every time the swelling musical score begins, Josiah gets a big grin on his face. He knows it is going to be exciting


You can follow Heirloom Audio Productions via the following Social Media outlets. Don’t forget to click on the banner below to read more reviews.

Posted by Rebekah Teague at 7:34 PM